In our world today there is much debate about the origins of everything. Atheist are touting their theories of the Big Bang and evolution while Christians are talking about creationism and intelligent design.

Even within the Christian realm there is debate over the creation story itself. Some people want to use the Genesis account to prove the literal seven days of creation. Some people want to show that it was seven periods of time and was a much longer process than literally seven 24-hour days.

There is much discussion to be had on both sides of this issue, and there is much evidence for either stance regarding creation. There is even evidence for evolution – though not as much – in terms of the creative process. This article isn’t meant to persuade you on what the true scientific process of creation really is. What I do want to show you is a couple things you may have missed and one really big thing that is rarely talked about concerning the Genesis account.

Where the bible says “The earth was without form…” there is a potential translational grey area. The word “was” could also be translated “became”.

I’m not sure what Moses was thinking when he wrote Genesis 1:2, but it sure is fun to wonder sometimes. This is NOT the big, rarely talked about idea.

Poetry is a unique literary style that is much different than prose. It usually is meant to invoke an image to get across an idea. It also includes literary devices such as parallelism and simile and metaphor to bring about its conclusions.

The creation account in Genesis is often used as a scientific treatise on the creation of the world, but it is not – in fact, it is a poem. Let me give you one example to show you why I think so.

There is parallelism in the creation story.

Day 1: Light
Day 4: Sun, moon and stars (Sources of Light)
Day 2: Separation of waters
Day 5: Birds that fly in the sky and fish that swim in the waters below.
Day 3: Land
Day 6: Beings that reside on that land.

Then there’s rest on the seventh day.

We wouldn’t take any other poem and dissect it to try to explain the scientific process of anything, so why do we do that with the creation story? It is because we’ve missed the really big question that is answered in Genesis 1-3.

God had Moses record the creation story for one purpose: to remind us of the nature of God.

May we be people who don’t miss the forest for the trees. God is too awesome to miss out on Him while we argue about what He’s done and how He did it.

Oh, and one more thing: If we could understand how Jehovah does everything then He would cease to be God, but He is God, and His foolishness is wiser than our wisdom. 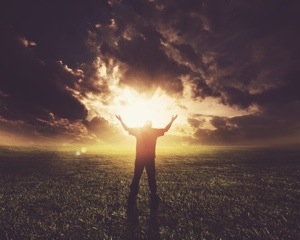 If I were to write a letter to the president there is a certain amount of pomp and elegance I would provide to the letter out of respect for the office and the intelligence that is supposed to be represented there. I would also speak to someone like the president or the governor with a certain elegance and dignity. I don’t want them thinking I’m some ignorant fool, nor do I want to offend them with my relaxed style of speaking.

When we write for school there is a certain amount of style that we are required to include in our poetry and prose so that people can follow along with what we’ve written. Even now, as I write this, there are rules I follow in order to make my writing readable.

However, I don’t expect my children to talk to me like that. I want respect from them. I like them to use the “magic words” of “please” and “thank you”. I want them to acknowledge my questions or directions with “yes sir” or “no sir”. But when they want to talk to me – just talk – I want to hear their heart. I don’t care if they speak with eloquence. I don’t want formalities. I just want to know what is on their mind. I want to hear them with love accepting them no matter how they speak about what is on their heart. I even want to hear when they are angry with me. I want to know why. And I love when they call me “daddy”.

Often I hear people talk about prayer and they say “I just don’t know how to pray. What if I don’t use the right words?”

There are no right words.
You don’t have to start with “Dear God” as if you were writing a letter to Him. He has never left you, and He knows when you are speaking to Him. You don’t have to close it out with “in Jesus name I pray, amen”. Praying “in Jesus name” is an attitude of the heart and not a colloquial phrase required for proper prayer.

You don’t have to use formal addresses like “Thee” and “Thou”. You don’t have to pray all the Christian catch-phrases you hear each Sunday. The only right words are the ones that come from your heart.

There is no required posture.
Often when we pray someone will invite people to bow their heads. This is done in reverence to the Almighty, and there is nothing wrong with that, but it is not the only posture of prayer. Sometimes I pray while looking around at the creation I’m standing in. I feel connected to God when I’m in awe of his mountains and trees and streams and wildlife. Sometimes I kneel when I pray. I’ve even prayed laying face down on the floor in desperation. Sometimes I look around the room and pray for those I see around me.

The only requirement is your heart.
There is a story in the bible that Jesus tells of a Pharisee (read: super religious guy) and a tax collector (read: scum of the earth – seriously, they thought of them like that back in Jesus’ day too). The Pharisee stood in the synagogue and prayed loudly thanking God for his self-perceived righteousness. He boasted in prayer as he used the fitting words to do his duty of prayer. Then the tax collector began to speak and didn’t look up to heaven or speak loudly. He beat his breast and simply said “have mercy on me, a sinner”. Jesus said that the tax collector went away justified that day for he poured out his heart to the Almighty, and the Almighty heard.

That’s what God wants from you. He wants to hear what’s on your heart. There are no right or wrong words. Just talk to Him. It might feel awkward at first, but keep at it. When you realize that God’s presence is always with you, then you will find prayer to be a refreshing connection with your Creator who loves you more than all of creation. You are his child. Talk to him like he is your daddy.